FIRST POWER UP is the FRC game for 2018. Two alliances will face off to place POWER CUBES one either a SWITCH or a SCALE with the goal of taking ownership. Alternatively, teams can send a power cube through the EXCHANGE where it can be used to gain one of the power ups. LEVITATE awards an alliance one free climb at the end of the match. BOOST multiplies the amount of points per second of ownership by 2. Force grants ownership of the scale, switch, or both depending on the amount of power cubes used.

FIRST STEAMWORKS is the FRC game for 2017. Two alliances will face off in a battle to get their AIRSHIP flying first. To do this, teams must gather FUEL and place GEARS on their airship. A human player then takes the gears and uses them to take flight. At the end of the match robots will climb their airship so that they fly with it.

FIRST STRONGHOLD is the FRC game for 2016. Two alliances will face off to bypass and eventually destroy their enemy's DEFENSES located at the OUTERWORKS. They will then lob BOULDERS into their opposer's TOWER until they have the opportunity to scale and capture it.

RECYCLE RUSH was the FRC game for 2015. Two aliances stack TOTES and TRASH BINS, taken from the LANDFILL, on top of SCORING PLATFORMS located on both sides of the field.

AERIAL ASSIST was the FRC game for 2014. Two aliances will take red or blue EXERCISE BALLS and shoot them into either the HIGH GOAL for 10 points or the LOW GOAL for 1 point.

ULTIMATE ASCENT was the FRC game for 2013. Teams go against each other to shoot different FRISBEES into different GOALS to earn points ranging from 1-5 pts. 5 pts are earned if a robot shoots their frisbee into a tower called the PYRAMID 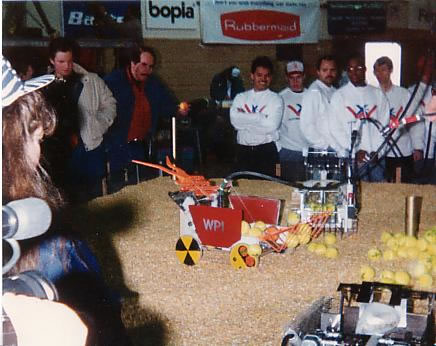 MAIZE CRAZE was the first FRC game. The field was only a 16 foot by 16 foot square piece of plywood. Corn was layered all over the field. Robots had to move tennis balls into their home base to score points. The team with the most tennis balls won.